Firefighters determined to make a difference after most recent fatal fire claims the lives of two small children and their great-grandmother.

It was a typical Friday night for the Zarate family.  It was early June, as Marco and Amanda spent the evening together in their home with their four small children, brothers Daniel, Marco Jr. and Julian along with their infant sister, Vanessa and family matriarch, 92 year old Raquel Figueroa.  Early in the evening the children were tucked into their beds, while the adults stayed up late to watch the NBA playoffs, eventually falling asleep in the living room of their one story brick home in the Sommerset Estates subdivision located southeast of Conroe off State Highway 242.

Sometime after the children were tucked into the bed, a small fire broke out on the kitchen stove, igniting the kitchen cabinets and spreading into the attic, filling the home with hot, toxic smoke.  The home was equipped with a smoke alarm in the living room, but by all accounts it never sounded, either because it was too old or because the fire had disrupted the electrical power in the attic above the kitchen.  At the time the home was built, new smoke alarms were not required to have a battery backup, relying solely on the home’s electrical service.

Marco was the first to wake up, followed by his wife, Amanda.  They awoke to a parent’s worst nightmare, they could not see or breathe, and they could not reach their children’s bedrooms through the smoke filled hallway.

One neighbor called 911 while a second neighbor went to the home to search for the children.  As he opened the front door, he was met by a wall of smoke, but he was able to drop to his knees and just a few feet inside the door he found 7 yr old Daniel and 5 yr old Julian crawling on the floor unable to find their way out.  The neighbor guided the children out the front door and then joined Marco who was frantically trying to reach the remaining two children still trapped in their bedrooms.

Three Caney Creek Firefighters and their Battalion Chief were on scene only a couple of minutes after the first 911 call, and as they arrived they saw Amanda Zarate crawling out the front door with life threatening injures.  Firefighters immediately entered the home at great risk, making their way to the children’s bedroom, pulling 6 yr old Marco Jr. and 1 yr old Vanessa out as the first EMS crew arrived on scene.  Sadly, while the fire never reached their bedroom, both children succumbed to smoke inhalation.  Firefighters then re-entered the home and soon found the body of their great-grandmother Raquel in the living room of the home.

An accidental kitchen fire, the most common type of fire in the nation today, had forever changed the lives of an extended family and all those who responded and knew them.

This Saturday, October 27th,  Montgomery County Firefighters and their partners will be fanning out across Montgomery County, installing smoke alarms and educating residents about home fire safety.

“Get Alarmed Montgomery County” is a County-wide effort aimed at promoting fire safety and reducing the risk of loss of life to fire, especially for our most vulnerable citizens.   National statistics reveal that children and the elderly are the most likely to lose their life in a fire, with the risk of death doubling when there are no working smoke alarms in the home.

Our goal during this effort is to keep another family from suffering a similar tragedy.  During a similar effort last year, over 500 long-life smoke alarms were installed in bedrooms and hallways of nearly every home in the Tamina Community.  Those alarms feature lithium batteries that will last as long as 10 years, helping to insure the safety of an entire community.  With this year’s effort, we hope to make a similar impact across the region.

If you own your home and cannot afford smoke alarms, or need help installing alarms you already have, you can go by your local fire station or call the Montgomery County Fire Marshal’s Office at (936) 538-8288.   You don’t have to wait until October 27th, as crews are already out working in the community.

The Montgomery County Fire Chief’s Association, a 501 C-3 non-profit organization, has established a donation fund for those who would like to support this effort.  The Howard Hughes Corporation has graciously agreed to open that fund with a $2500 donation, but we need everyone’s help to not only make this event a success, but to sustain future efforts.  Donations large and small are welcome, and if your group would like to assist, please contact the Montgomery County Fire Marshal’s Office at (936) 538-8288 or you can follow the Fire Chief’s Association on our Facebook page.

If you are renting your home, State Law requires that your landlord install working smoke alarms in every bedroom and in the hallways serving them. Once the alarms are installed in rental property, tenants are responsible for replacing the batteries.  If you own rental property or are renting and have questions, please contact the Fire Marshal’s Office for assistance. 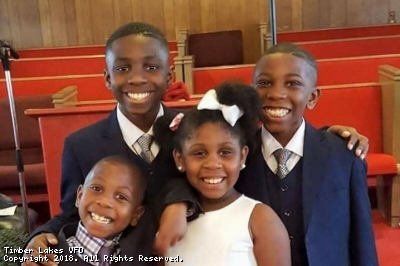 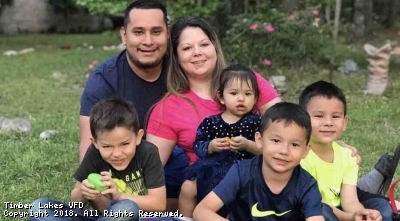 8 entries in the News 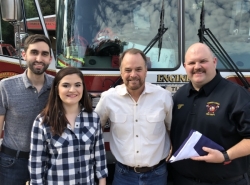 On 10/12/2019 the Timber Lakes Volunteer Fire Department held an open house to celebrate it's 50th anniversary with the public. In attendance was State Representative Steve Toth who presented the department with a Texas flag that was flown over the states capital in honor of the TLVFD 50th anniversary. On behalf of the members of the Timber Lakes Volunteer Fire Department, Chief Kennedy would like to say thank you to Rep. Steve Toth - House of Representatives District 15 for the Texas f... 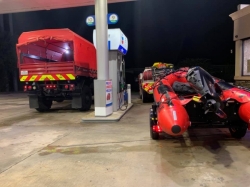 On Thursday, Sept. 19, 2019 the Timber Lakes Fire Department responded to assist neighboring departments in Eastern Montgomery County with numerous evacuations due to rising flood water generated by TS Imelda. Evac 142 and Rescue Boat 142 with TLFD Swift Water technicians responded and made numerous rescues while deployed throughout the area. Crews spent most of the day and well into the next morning conducting rescues.

The Timber Lakes Fire Department has recently purchased new firefighting gear for our firefighters that is designed to minimize exposure to potentially harmful, cancer causing particles. After careful consideration, TLVFD has decided to purchase new bunker gear from Viking Life-Saving Equipment. This new gear is designed to remove the outer shell while at the fire scene, after it becomes contaminated from working inside of a structure fire and to be placed into a specially designed dissolvable w...

GET ALARMED MONTGOMERY COUNTY! Firefighters will be out in force this Saturday installing smoke alarms as part of regional Fire Safety initiative           Firefighters determined to make a difference after most recent fatal fire claims the lives of two small children and their great-grandmother. It was a typical Friday night for the Zarate family.  It was early June, as Marco and Amanda spent the evening together in their home with their four small c... 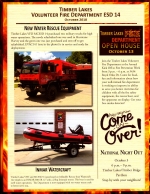 Please see the attached pictures for a copy of our newsletter

JARED - The Galleria Of Jewelry donates stuffed animals to TLVFD

On 10/03/2018 a generous donation of stuffed animals was made to the Timber Lakes Volunteer Fire Department by Jared  - The Galleria Of Jewelry, located at The Woodlands Mall. These stuffed animals are used during emergency events to help provide some comfort to children that may be involved. The Timber Lakes Volunteer Fire Department would like to extend a big “Thank You” to Jared – The Galleria of Jewelry in The Woodlands for the...

IMMEDIATE RELEASE:     Some in the community might have noticed more activity at the local fire station in Timber Lakes / Timber Ridge since the beginning of the new year.  That is because starting on January 1, 2018 the Timber Lakes Volunteer Fire Department began operating as a combination department and now employs part-time paid firefighters to ensure the fire truck is staffed 24/7 to meet all of the needs of the community.  TLVFD was the last 100...

8 entries in the News 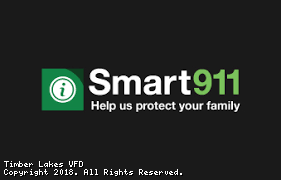 FollowTweet
Copyright © 2006-2020. YourFirstDue Inc. All Rights Reserved. Designated trademarks and brands are the property of their respective owners. Content on this web site is supplied by Timber Lakes VFD. YourFirstDue Inc. cannot be held responsible or liable for any content, text, pictures, or any other media found on this web site. Maintained by the members and staff of Timber Lakes VFD.
Management Login
Powered by